King Peak is the tallest mountain in the King Mountain Range.  At 4091 feet /1247 meters, it isn’t terribly tall.  But its got near enough to 3,000 feet of prominence (height from the ground the mountain is on to the top of the mountain), which makes it tall enough for me.

We took the Lightning Trail to the summit, but there are 2 other routes that you can take.  Probably more if you’re backpacking.  If you are doing it as a day hike I recommend Lightning.  The trail is well marked and fun.  After reaching the summit we took one of the alternative routes, King Crest North, for a couple of miles and found the going discouragingly slow.  Lots of fallen trees meant it was hard to maintain a stride.

Getting to the trailhead was 12 miles of Fun driving.  It took more than 45 minutes to cover that distance, and in that time we forded 5 small creeks.  As long as you’ve got clearance I think even 2-wheel drive vehicles would make it, but extricating yourself from the creeks could be more dramatic than it was for us.  The creek shown below is the largest we traversed.  This was the day after some rain, so expect it to be worse while raining and better during dry spells.

Upon arrival at the trailhead we were greeted by signs that disagreed on trail length.  One person had even taken it upon themselves to ‘fix’ one sign.  Interestingly, none of the three (the two original and the correction) agreed with one another.

I have a feeling the correction is right, but I cannot confirm as we only traveled 1.4 miles on King Crest Trail.

All together we hiked 8.39 miles, reaching our max altitude (an indicated 4068 but definitely the top) in 2.8 miles.  Its a steep climb and a total elevation gain of 1900 feet/580 meters.  We were worried that we wouldn’t be able to see much from the top due to cloud cover, but the clouds proved to be largely on the landward side of things.  We got some peaks of the Pacific on our way: 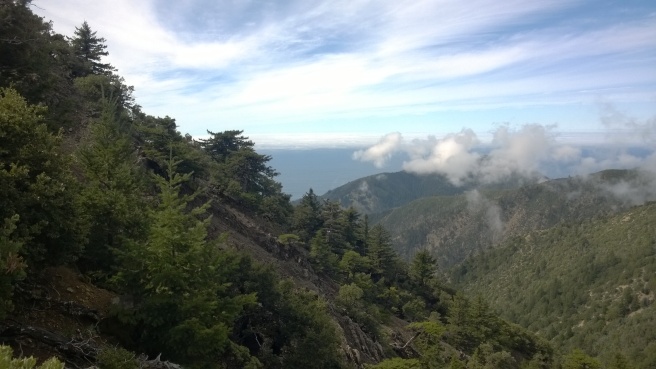 Prior to playing peakaboo with the Pacific, the madronas put on a show.  For those easily offended, avert your eyes now.  Naked trees follow!

They normally wear more bark than that officer, I swear!

Oh, and while you’re averting your eyes from the nekkid trees, keep an eye out for everyone’s favorite PNW friend:

Banana slugs are awesome!  And it is distressing stepping on them….  So try not to.  But if you do – when you come back the spot, check out the squished one.  Usually it is being eaten by another banana slug.  The cycle continues I suppose.

The top of the mountain comes slowly, as summits usually do.  A few tricky turns obscure the final destination.  The summit itself has a platform (for camping on?) and a fire pit.  The prevalence of flies tells me someone may not have made their cathole deep enough.  Arid environments require deeper holes.

The views make the hike worth it. 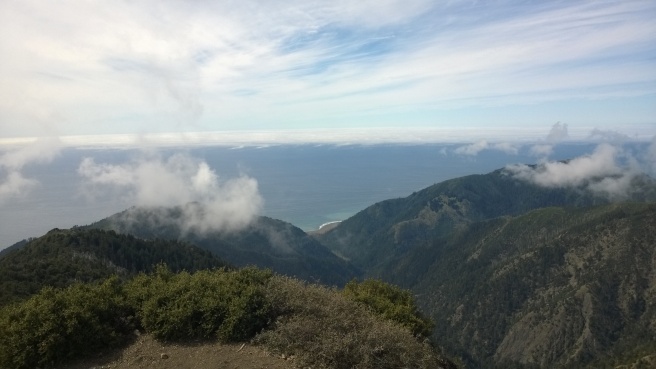 Have Something to Add? Cancel reply