Looking to camp on Cumberland Island, well then you’re gonna need to figure out which campground you want to stay at!  Although some of the barrier islands seem like backcountry playgrounds that allow beach camping, everything is tightly managed at Cumberland befitting it status as a National Seashore.

If you’re just joining me, then perhaps you’ll want to check out my previous post which provides an overview of my trip to the island.  Otherwise, read on!

Sea Camp and Stafford Beach are “nicer” in that they have more amenities.  Both have bathrooms with showers, and the campsites have fire pits.  Sea Camp goes another step further and offers lockers for storing food out of reach of the ever-present raccoon population.  Both sites have water, however only Sea Camp offers potable water, if you’re staying at Stafford either bring a filter, boil everything, or haul a bunch of water in with you! 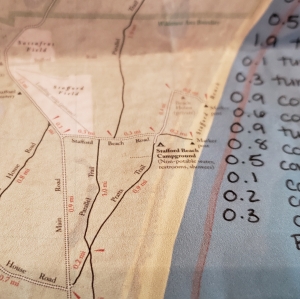 On the topic of hauling things…  Sea Camp is an easy half mile from the ferry dock while Stafford beach is 4.3 miles from the dock.  When you disembark the ferry you’ll be able to pick up a wagon to shlept your stuff it that suits your style.  The wagons are simple and robust looking.  If memory serves they’ve got pneumatic tires but no suspension – be careful how you pack your eggs!  I was backpacking so the wagons were something of an  amusing novelty to see, but I can see how they’d be useful if you’re setting up a lot of gear at Sea Camp or Stafford!

Hickory Hill is the next furthest along and is an easy 6.3 mile hike from the dock.  Hill is something of a misnomer for this campsite (as well as much of the island) and it isn’t noticeably higher than the rest of the very flat island.  This site was…uh…a bit rough around the edges.  Used condoms?  Yea…thats one of those things that definitely qualifies for the “pack it in, pack it out” rule.  I think this site’s ease of access mixed with a degree of seclusion means that casual campers have left it a bit of mess.  The closest water source is a sulpher-laden non-potable spigot 3/4 of a mile away.  My advice is to skip this site and make your way further on, you intrepid explorer!

Oh – one more tiny detail.  There isn’t any potable water here.  Yes, you’ll have passed a spigot delivering foul-smelling non-potable water about a half mile south (the sign says 1/4 mile but my legs and Timex call BS) but don’t let the siren call of shorter distances tempt you!  Instead, take the 1.1 mile walk west to Plum Orchard.  There you’ll find a mansion that is inhabited during the day by very nice, elderly, park employees who will try to get you to take a tour of the mansion if you only come by tomorrow at 11am.  I’m sorry ma’am, I’m just here for some water…and a bathroom if you’ll allow the likes of me in the mansion!  The best place to get water she informs me is the spigot on the right side of the front of the house.  I had been planning on filtering it, just to be sure, but unprompted she tells me that she drinks from it all the time.  Good enough for me!

The bathrooms for public use are a bit further along, down by the “hunting lodge.”  Basically you walk south until you see picnic benches placed in random clearings in the wood, then you walk west until you find it.  Easy as that.  The bathrooms have showers, toilet paper, and doors that lock.  I love the wilderness, but I also love indoor plumbing.  Don’t try to skip the mansion and just get water at the hunting lodge.  The water coming out of those taps is rank with sulphur!

Curiously, it seemed that people were camping just east of the hunting lodge.    Ah! It is on a map!  It’s just in a very faint grey that barely shows up even on the .PDF version of the map I printed, and is indeed the “Hunt Camp.”  It, like a few other areas of the island, is closed to the public. 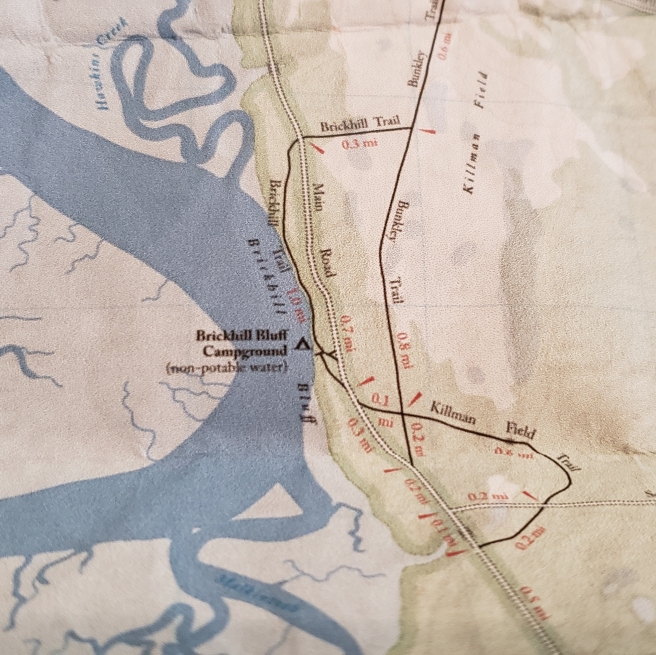 Last, but certainly not least, is Brickhill Bluff.  This site is the furthest from the dock, and the shortest route is 9.3 miles.  This route, while the shortest, is not the one I would recommend as it takes the main road instead of the smaller hiking trails.  While the main road is nice enough, I think that you’d be better served taking a slightly longer but more scenic route.

Like Yankee Paradise, Brickhill Bluff campground is located along the Brickhill Trail.  This isn’t nearly as much of a problem as it is so far removed from where most day hikers are, and the trailhead itself is very challenging to find from within the campground.  We looked for it and only were able to find it by going out to the main road and finding where it crossed the road north of the campground.  This is a big campsite.  There are probably 4 or 5 great beach front sites, so if someone else is already there just keep walking north or south along the water and you’ll probably find something with a bit more seclusion.  The first night we only discovered that we had neighbors on accident while trying to find the Brickhill Trail!

Oh, and in keeping with the theme of the campsite names, the “bluff” is between 1 and 5′ high at high tide.  These campsites are very low lieing!  On the north end of the island there are pretty serious cliffs…but down here its basically sea level.  The site is on the western shore which means you get to watch the sunset every night…or you get to watch the storm front rolling in (in this part of the world storms tend to travel from west to east).

While there aren’t any bathrooms there is a non-potable pump that provides water.  It’s the sweetest water on the island as far as I can tell, just bring a filter and you’ll be fine.  If you’re planning on staying a couple of days and want to enjoy the majesty of indoor plumbing (can’t say I blame you), its only a little more than 2.5 miles to the bathrooms at the Alberty House at the north end of the island.  The first mile is slow going with overgrown paths and lots of blackberry brambles, but otherwise it’s a pretty easy hike.  The water at the Alberty House is non-potable and very rotten-egg scented.

At both Brickhill Bluff and Yankee Paradise the sites we selected had a little something extra: tables or chairs!  Well…maybe that isn’t entirely true.  At Brickhill I found a pair of bricks and a piece of discarded lumber which turned into a perfectly serviceable (as so long as you were desperate) chair and or table.  While I don’t have a picture of the table and chairs at Yankee Paradise I think you’ll be able to imagine them just fine.  One chair was a stump chainsawed out of a big tree, and was actually tall enough to be comfortable.  The other chair was a “bench” made out of an old fence post and two smaller stumps.  The table was a plank.  All in all its about as fancy as wilderness sites get!

One final note!  At first I was a little confused about how one goes about filtering water that is coming out of a pump or spigot.  I mean…I’ve got a filter…it has a dangly bit that goes into the water…hmmm.  But then I remembered!  My camp stove holds a large enough amount of water to serve as a container from which to pump.  Even though it has been exposed to non-potable water I was going to boil it anyway so presto!  Easy drinking water : )

Have Something to Add? Cancel reply